Yesterday, while on my lunch break, I headed to the nearby liquor store to take advantage of their competitive Korbel champagne prices. (What’s it called when you have beer taste on a beer budget?) I wanted to celebrate the positive 2011 performance review I had just earned when I got home that evening. Suddenly, I started laughing. I knew what my next blog post would be about.

You Know You’re a Guilty Pleasure Enthusiast When…

1.) You Start Embellishing Life Events to Make Them a Cause for Celebration, i.e., Champagne

As it is, I toast to myself every Friday night for making it through another work week, but lately I’ve come up with reasons, mid-week, to celebrate. Last week, it was reaching a significant milestone in a project. The week before that, I celebrated finding delicious, cheap champagne at Trader Joe’s by drinking said champagne.

Next week, I suspect matching socks will earn me some of this liquid happy.

2.) You Have to Give Up Vampire Diaries on Your DVR to Make Room For 30 Rock, Parks and Recreation and American Idol

This was a tough one for me to give up on the DVR, which only allows me to record two shows at once. Unlike my early dismissal of MTV’s Teen Wolf, I’ve been holding out hope for CW’s The Vampire Diaries. Believe it or not, it wasn’t the brooding vampire brothers, but rather side character, Caroline, who really won me over. She’s got layers, people.

Oh Thursday nights, why are you such a cornacopia of television goodness?

3.) Your Co-Workers Laugh at Your Breakfast

I see nothing wrong with the two giant slices of leftover pizza on my desk, thank you very much. Keep it up and tomorrow it will be egg salad.

4.) You Watch a Movie Starring Ginnifer Goodwin and Kate Hudson Three Times in One Week

Something Borrowed. I am completely obsessed. It’s on HBO OnDemand right now, through April 30th (which, incidentally, is my 30th birthday. This movie happens to open with the lead character’s 30th birthday. …I’m seriously starting to see cosmic signs in this. It’s not good. I even downloaded songs from the soundtrack. Intervention? Anyone?).

I’ve bawled my eyes out for a week over this movie. I’m still not sure how I want it to end; somehow the happy ending is also the bittersweet one. To me, it takes the road less traveled, as far as romantic comedies go, and despite its inherent cheesiness, there is something so genuine about the relationships. Kate Hudson executes her female d-bag role perfectly, and Goodwin’s sweetie-pie persona is irresistible. Oh! Oh! They even have a whole bit about a chipmunk (chipmunks are kind of my thing, in case you’re new here)! See what I’m saying about cosmic signs?

And I haven’t even gotten to John Krasinski yet. Suffice it to say, he’s as perfect as a chipmunk eating Dunkaroos.

5.) Even Your House is Wearing a GoGuiltyPleasures slap bracelet 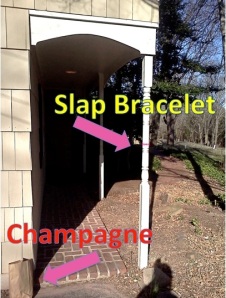 It’s been there since Christmas. (The slap bracelet, not the champagne. Champagne, as I’m sure you guessed from #1 on this list, has a two-hour lifespan around these parts.)

Are you living the guilty pleasure-ful life? How so? If you’re not sure, would you be willing to try some Dunkaroos?