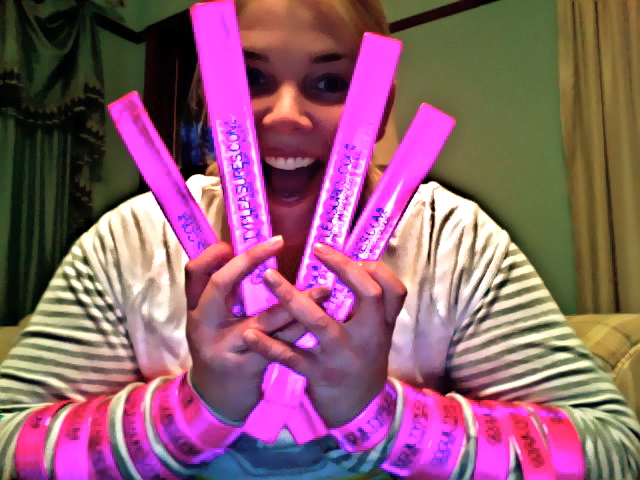 I’ll be honest. I sensed in my heart of hearts that chipmunks young and old, or in that strange in-between age where you know you should stop making PowerPoint presentations about a certain “Glee” cast member but you just can’t seem to help yourself, and you genuinely wonder if maybe you never really embraced your childhood and you’re a victim of this unstoppable regression and pretty soon you’re going to start sucking your thumb and eating cake while smearing icing all over your face because you think it’ll get a laugh…wait….what was I saying? Oh, right: I knew bringing back slap bracelets was a shoo-in.

So I wasn’t surprised to hear from many of you once I announced my slap bracelet giveaway. After shipping out several dozen, I waited patiently for you to hold up your end of the deal – to send me a picture of you/your loved ones/pets wearing the slap bracelet(s) so I could post it on this very blog.

I was not disappointed. The pictures I’ve gotten so far are…well, you’ll see. I’m going to share the photos in installments, to ensure that you, and your blogs (where applicable), receive the adoration they deserve. To be fair, I’m posting them in the order in which they were received.

Now enough of me. On to you!

#1 – Renee of Life in the Boomer Lane

After you see this picture, I don’t think I’ll have to say much else to convince you Renee is a true chipmunk, but you should also know that Renee is co-author of “Saving the Best for Last” and “Invisible No More,” which you can learn more about here. Not only is she an accomplished writer, but she is funny as all get-out, and much like slap bracelets, her humor transcends age.

I first spotted Peg commenting on The Good Greatsby‘s blog; she was always coming up with captions for his caption contest that were better than mine, as evidenced by her constant ‘winner’ and ‘runner-up’ status. It took me a little while to shove my ego aside and drink the Peg-o-Leg Kool-Aid. After witnessing a lively, and hilarious, competition between Darla and Peg over said caption contest, I poured myself a nice, tall glass. Peg’s blog always makes me laugh out loud. She really understands the power of illustrating a joke, which you need to see for yourself.

Here’s the message that Peg sent along with these fab pictures. Bottoms up!:

The slap bracelets arrived, and were a GODsend over the New Year’s holiday. Here are just some of the things that happened because of them.

1) My normally feeble morning coffee was definitely more robust and richer tasting when I was wearing the bracelet. 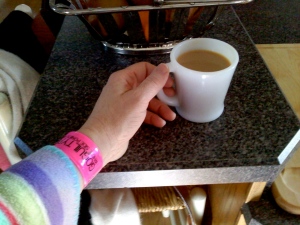 2) Its secret powers inbued me with the strength of will needed to tackle the dreaded post-Christmas task of tree put-awaying. 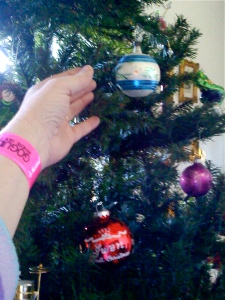 3) When my GPS went out on the highway, the magnetized core of the slap bracelet drew my hand to true north, thereby allowing me to make it to my destination safely. 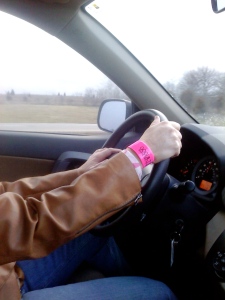 4) No less than 3 college-age hipsters fought for the privilege of wearing the uber-cool slap bracelets of style. 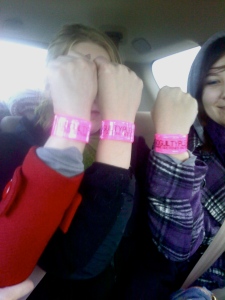 5) As for my cat, Beeby, well…I won’t lie.  She didn’t like them.  Her response was something like “get this torture device off me, you sadist!” 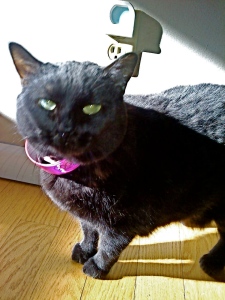 So except for Beeby, it was all good.  Thank you for saving New Years for the entire Peg-o-leg family!

I am new to Thoughtsy’s blog, but I can tell you right now I am falling in love. For one thing, she currently has a picture of a kitten inside a box of Pop Tarts on her Facebook widget; for another, one of her recent posts was dedicated to dessert-flavored vodka. I am really excited to learn about what else we have in common, and to find out more about her relationship with Kiefer Sutherland. 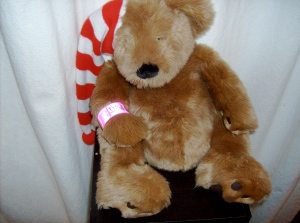 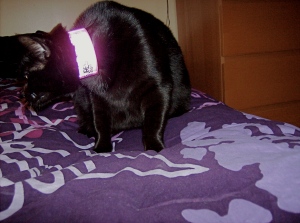 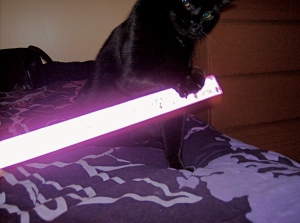 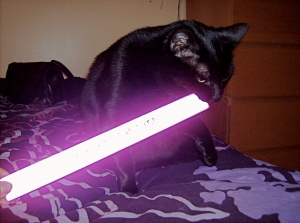 Thank you SO much, Renee, Peg and Thoughtsy! You have officially been upgraded to Chief Chipmunk status.

And believe me when I say – you are NOT going to want to miss the next installment(s)!

I still have more slap bracelets, so stop schmooping around and email me at JKSchnedeker@yahoo.com!

Turn Your Dinner Frown Upside Down!