DISCLAIMER: The following representation of “Equus” is the view of one blogger and one blogger only. And even though said blogger is 28-years-old and should be able to write about plays and nudity with a certain level of maturity, in reality, she can’t. So, this post bears little resemblance to the actual play itself, which is obviously a masterpiece worthy of Daniel Radcliffe and his penis. Thank you.

The jokes were flying during the spring of 2008, once my mom said she wanted tickets -for her birthday- to the new Broadway show, “Equus,” starring a naked Daniel Radcliffe.

You name it, I said it. Of course, she wasn’t the only one who had interest in the play. I’d been reading the J.K. Rowling books for a decade. Now things were getting serious, and I wasn’t sure what to make of my beloved Daniel Radcliffe’s new acting endeavor. Any amount of Harry Potter-special-feature-viewing will show you that Daniel is the coolest, most modest, mostest talented bloke around.

But, was I ready to see his…PENIS? With my MOTHER? I couldn’t even think the thought without blushing!

Much ado about nothing, you say? No, that’s a different play. I have a LOT to say about this one. Our seats were really close.

November 15th finally rolled around, and it was time to face the music. Except this wasn’t a musical. The play is, in case you are not familiar with plays about emotionally disturbed teenage boys who love (I mean LOVE) horses, a bit of a downer. In fact, it’s downright disturbing. Sexy men in intimidating metal hoof-clogs stomp around in the dark, wearing tights and horse heads made out of wire, while Daniel, completely dwarfed by these creatures, strokes them suggestively.

You do wonder how it’s going to happen, though. There are quite a number of horsemen (and by horsemen I mean the men dressed as horses) to pick from, and they all kind of look the same, as horses do. Plus, it’s so dark. Will you be able to see anything? You didn’t pay $119 plus processing fees and convenience charges for a G-rated experience.

A blonde girl, the same age as Daniel’s character (17), is introduced, and you start to hope he’ll snap out of his equine trance and go at it the old-fashioned way. Well, he does, in a matter of speaking.

Sometime shortly before you convince yourself you can hack it, Daniel and his lady friend strip down to what their mommas gave them and he mounts her on top of a large black box (a hay bale?). They mock hump while Daniel’s character fantasizes about Black Beauty and you not-so-objectively critique the girl’s breasts (which you later recall when she makes her debut on “True Blood”). He can’t close the deal and runs around the stage in a rage, his naughty bits jingle-jangling about (did I mention he blinds six horses? That’s the kind of drama we’re dealing with here, people).

When I say this kid has balls, I’m not trying to be cute. Seriously, what 5-foot teenage boy has the nerve to do this 8 times a week in front of thousands of people? Does he ever get aroused? Obviously he doesn’t have anything to worry about, or he wouldn’t be up there. Right? 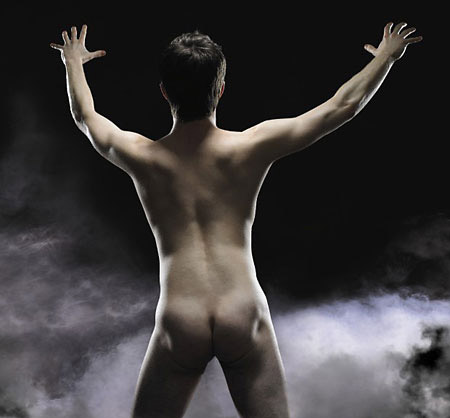 …Right. Sorry to disappoint you, readers (really, I am). Everything checks out. He’s got a perfectly above-average*, uncircumcised, unaroused Little Daniel. What’s more, I DIDN’T die of embarrassment. What I AM having a hard time (pun intended) shaking, though, is all the horse stroking. I REALLY don’t like horses.

*I should tell you that when I was discussing this upcoming post with my mother, she had a different take. “Disappointing,” was the word she used. “But I wouldn’t expect you to know any better,” she added. …Thanks, Babs.