My family arrived at Newark Liberty Airport last week with plenty of time to catch our 12:34pm flight to New Orleans. It was Spring Break for this family of (mostly) teachers, kids, and retirees, and we were eager to cash in on the opportunity to visit a city none of us had ever seen. Everyone stared at me while I pulled out my phone to retrieve our flight number, punching it into the check-in kiosk. I was skating on thin ice for not having checked us in the night before.

My parents looked around nervously, trying to catch a glimpse of the security gate. The lines were surprisingly dead for a Tuesday morning. As Babs (mom) stared at her baggage check sticker like it was written in Klingon, my sister swiftly tagged both of her kids’ bags and called, “Okay, let’s go!”

All six of us made our way to the security gate, where I pulled out my wallet to grab my driver’s license.

“What’s wrong?” my sister asked. She followed my gaze.

“Oh my god. Where’s your license?”

I slapped my hand to my forehead.

“In my coat pocket,” I moaned.

Her eyes widened. I had quickly put my license in my coat pocket that morning in order to move my car to a tow-free spot for the week. It was still snowing in New Jersey, and I was thrilled when I put the puffy gray jacket back on its hook in the landing of my apartment, because, hey! It was 80 degrees in NOLA! Woo hoo! Let’s GO!

“I was trying to be responsible [and not drive around the corner without a license]!” I cried. I had never bothered to be so responsible before, which is why I didn’t remember to put the license back in my wallet.

I looked over at my father, halfway to the TSA pre-check line, and thought, If looks could disown. My sister and I had planned this whole thing on his dime and now I was about to ruin it all.

Being a 3-month-old meditating guru, I suddenly thought: This is a test. Don’t cry. Breathe. Stay calm. There is no f^&$@$ way they’re letting me on the plane!!!!

“Okay, let’s get on line and come up with a plan,” my sister said, snapping into teacher mode.

I only had time to chug what was left in my water bottle before we faced security, all the while trying to ignore the exclamation points firing in my head. People in airport uniforms hated me. I was searched every time, convincing me I had either “dumb enough to carry someone else’s crack-lined luggage” or “mail order bride” tattooed on my forehead. Because of this track record, I always got nervous, which then made them suspicious, and well, it was just a vicious cycle that ended with someone getting to second base.

The agent smiled (smiled!) at my sister BECAUSE OF COURSE HE DID and once she explained the situation, he politely said he’d call his manager, asking me to provide any other I.D. I might have in the meantime.

Did…did this mean…could I possibly… Nooo. I yanked out every credit card, health insurance card, student I.D., $3.08 Borders gift card (hey, how did that get in there?), and business card I had in my wallet, little pieces of my identity fluttering out like it was Mardi Gras.

Five (or two or forty-seven, who can tell when you’re wondering why you also forgot to wear an adult diaper?) minutes later, I was sent on through without so much as a pat down. I reached my family, patiently waiting on the other side of the security gate.

“Time for a drink?” Babs asked after taking one look at my face.

But I didn’t cry! And I made it through! Bring on the Hurricanes! And bring them on we did… 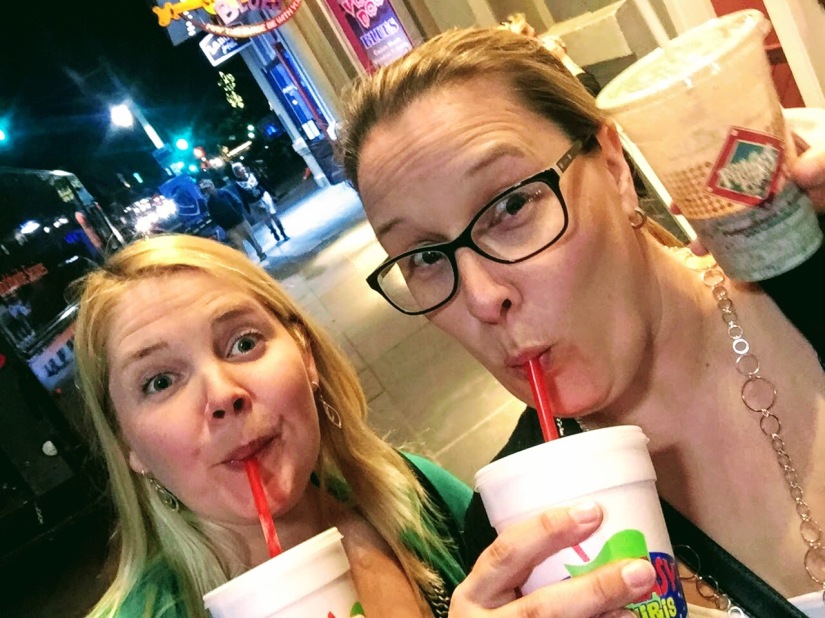 …until two days later. When I started feeling…funny.

After an exciting and sleepless night followed by a raging fever, we concluded I’d come down with the stomach flu, a new friend who planned to stick around, Kato-style.

Now that the fever’s finally gone, I feel reborn . Except that my stomach is still to me what women are to men: a total mystery.

As for the rest of New Orleans? Also a total mystery.

Any other travel mishaps you care to share? Please. Make me feel better.