Uncle Jesse’s collar rattled as he pranced from paw to paw, letting out a low whimper every few seconds. His evangelical nature revealed itself every time I began our sacred ritual: Water bottle…yes…backpack…YES…leash…YES!…sneakers…PRAISE JESUS YESSSS!!!!

I wonder if he knows what he’s in for today, I thought, pulling a package of tortillas from the fridge.

With water bottles filled, I turned to sustenance, folding a few falafel balls into a wrap for me, and a sweet potato into one for Uncle Jesse. It was getting harder to believe the entire world was on lockdown, with Mother Nature beginning to show her sweeter side, beckoning restless souls to pack a picnic or meet some friends for happy hour around a sun-soaked table. 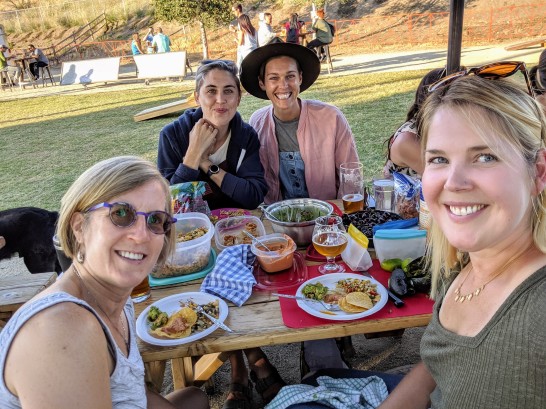 OH GOD I MISS THIS.

I checked the weather one last time. High of 60 with “abundant sunshine.” I was still getting used to the latter. Springtime on the east coast usually brought warmer temperatures by mid-April, but also a lot more rain. Bend, Oregon, on the other hand, still saw frigid nights and little precipitation.

As I packed my hiking bag, I went the extra mile (pun sooo intended), grabbing an empty shopping sack and stuffing spare socks, a shirt, Band-Aids, an extra hat, and a hand towel into it. I cast a glance at the calendar where I’d been counting down the days until this moment.

Every square of 2020 was filled with pencil scribbles tracking my progress, even though the Bend Marathon, originally scheduled for April 19th, had been canceled in March, courtesy of COVID-19.

As a final step, I put two extra sandwiches, water, and a can of Coke into a cooler bag. I clicked my race belt on, grabbed my hat, and put on my dusty and trusty Altra trail running shoes. 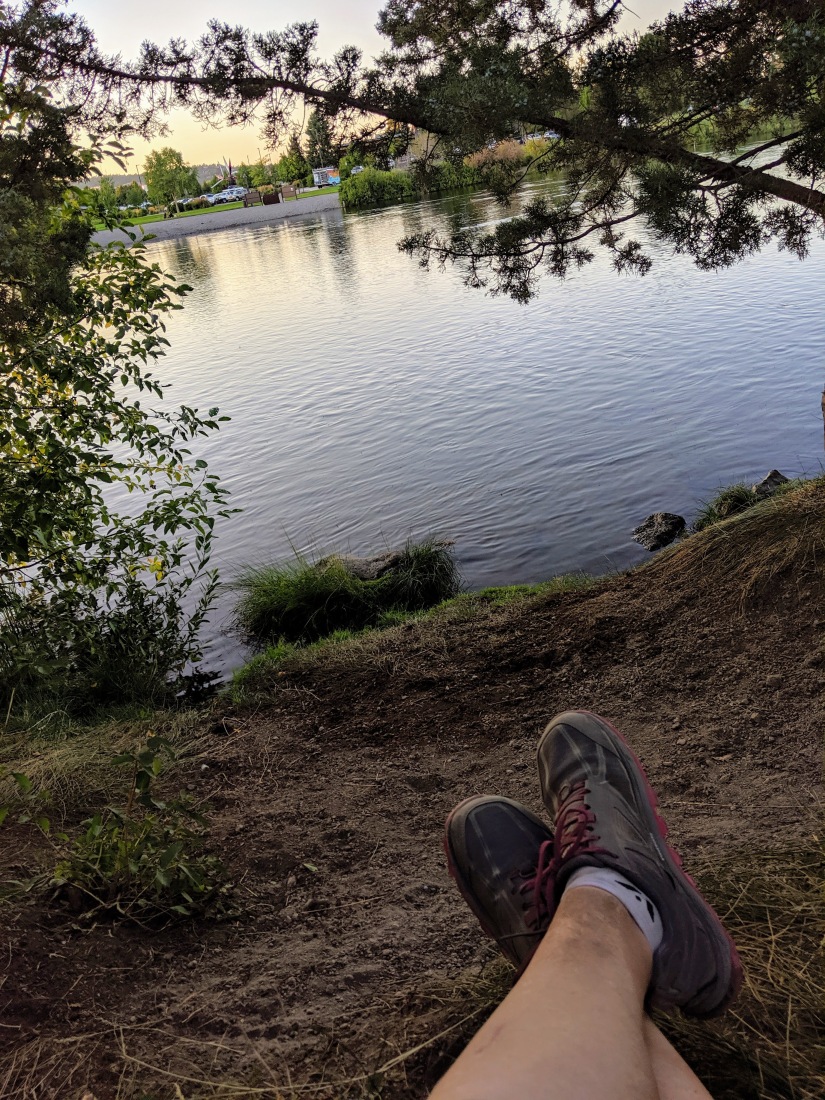 “Allons, mon chien!” I declared, tossing Uncle Jesse’s leash and my ear buds into the shopping bag as we headed outside. Neither four months of marathon training nor eighteen months on Duolingo French would be in vain!

I took a gamble on a new trailhead about 25 minutes east, near the Badlands, and landed in an empty parking lot just before 10:30am. Scoooooore. It was rare to find an empty trailhead on a Saturday morning, even during a pandemic. While a huge part of me felt guilty every time I got in the car to find a quiet place to run, it still felt safer to pick an open, abandoned trail than play ‘dodge-a-pedestrian’ while running on my neighborhood sidewalks.

Before COVID hit, I’d spent countless hours trying to find the least-used trails in a 30-mile radius – research that now paid off handsomely.

I moseyed over to the trailhead map, popping my ear buds in and snapping my water-filled backpack around my chest. Delighted to find a network of trails long enough to cover 13+ miles (meaning I wouldn’t have to do more than two loops on the same trail), I started my audiobook, locked the car, and began jogging. Uncle Jesse eagerly darted from side to side, making sure no stick went un-sniffed. 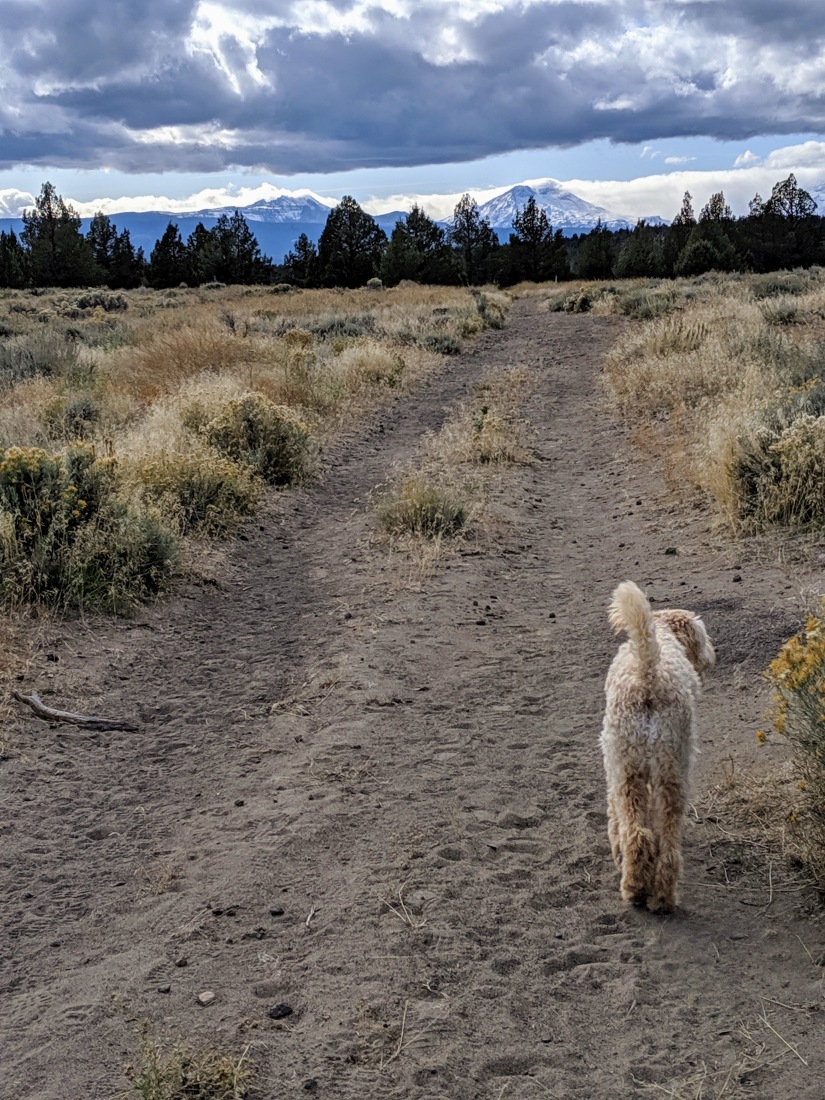 The wide, sandy trail was packed down, mostly flat, and totally deserted. A cool breeze wafted by as if I’d placed an order. Wow. Okay. This will work. I’d spent so many training runs trudging through thick sand, narrowly missing mountain bikers, and/or getting snowed on, that this felt like running inside Darren Criss’s smile while petting puppies.

The first hour flew by, even if my pace was nothing like flying. I was 6 years older and 40 (thanks, COVID-15) pounds heavier than the last time I thought I could run marathons.

But I was also four years plant-powered and properly trained now, with a rock-solid faith in both my legs and my mental fortitude. I was a week ahead of schedule [for the originally scheduled Bend Marathon on April 19th], so if I couldn’t make the six hour cut-off time today, I’d simply try again next weekend, with no one the wiser.

While I may have missed the adrenaline rush of cheering squads, the aid stations, and the course markings of an official race, I didn’t miss the hard pavement, early start time, or collective anxiety, which usually peaked 20-30 minutes before race time in the form of mile-long port-a-potty lines. I especially didn’t miss the well-intentioned, but severely misguided “Good job!” and “You got this!” cries of much faster runners as they whizzed by.

Hour two was harder than the first, as I began to realize there was no shade whatsoever; parts of the trail grew sandier while my backpack seemed to grow heavier. In hell, a mountain of sand and nothing but warm Gatorade and Donald Trump speeches will await me. Around the same time, I accepted that I would chafe in new, exciting places, despite wearing entirely road-tested gear.

I stopped just before hour three under a rare, shady tree. Uncle Jesse stared at me with big, questioning brown eyes. I pulled out our wraps and we ate them quickly. The other bonus to jogging vs. running long distances seemed to be that I could eat whatever I wanted without gastrointestinal distress. GU? Electrolyte chews? Energy bars? You can keep ’em! On all of our longer training jogs, we had simply stopped at the halfway mark and eaten sandwiches.

The high desert sun grew more intense, though there was still a strong breeze, and our water grew warmer as we neared hour four, running along a dreary stretch of power lines. I made the executive decision to turn back to the car for more water, cursing inwardly as my toe collided with another lava rock hidden in the thick sand.

“And the making of a hero…,” the British narrator continued on my audiobook, Natural Born Heroes. Though I’d normally hang on Christopher McDougall’s every word, I tuned in and out, distracted by trying to retrace my steps.

Just as we neared what I was (…pretty…) sure was the path to my car, I spotted a man and his dog – the first person I’d seen all day. Guhhhhh. I did an about-face and started off in the opposite direction. The unexpected detour meant it was almost five hours in before Uncle Jesse and I reached Suba-Ruby.

If we’re not even close to 20 miles, I’m calling it, I thought, defeated. I glanced at my Fitbit. 21.5 miles. I grinned maniacally.

“Oh, less than 5 miles. We are making this happen,” I said aloud. Uncle Jesse tilted his head in response.

I took a few gulps of deliciously frosty water from the cooler pack, quickly refilling Uncle Jesse’s Water Rover and my go-to bottle. I gleefully swapped out my ill-fitting bigger pack for my beloved little Camelback, and we set off to conquer the last few miles.

During the final 45 minutes, stiffness settled into my legs and every minute crawled by. I refused to look at my watch until I couldn’t bear it. Knowing I could do all 26.2 miles offered little comfort; I still had to do it. I imagined sitting on the couch with my cheap bottle of Trader Joe’s bubbly, eating whatever the living f#@& I wanted, watching my long-awaited Redbox rental, Little Women – including all of the special features, dammit.

When we finally rounded the bend back into the parking lot, I had to do two more tiny loops before my watch signaled that we’d hit our target distance. I let out a small laugh.

“You’re a marathon man now!” I shouted to Uncle Jesse, 10-year-old Vegan Wonder Dog, who had already climbed into the backseat and was staring at me with tired, but alert, eyes. Par for the course, his expression seemed to say. He hadn’t missed a single training run.

I poured water on a towel and wiped off my wind and sunburned face, wedging my “2020 Bend Marathon” trucker cap on, having finally earned it. I fed Uncle Jesse another sandwich, snapped a photo for the obligatory social media show-off, and we headed back home, where we sat on the hallway floor and shared a pint of Coconut Bliss ice cream.

Though I laid low and downed a couple of Aleve the next day -mostly for my back which wasn’t used to carrying such a large, heavy pack during runs- by Monday we were right back at it, jogging eight miles like it was nothing.

I’m almost 38, overweight, drink like a [quarantined] fish, and have no business feeling this great after running a marathon – much more than I can say for my younger, thinner, meat-eating self.

Also I love you. And if you’re a nurse, that love is, like, getting weird.