Sights whirred past as I tried my damndest not to go over 80 MPH. A giant, snow-capped mountain greeted me in the distance. 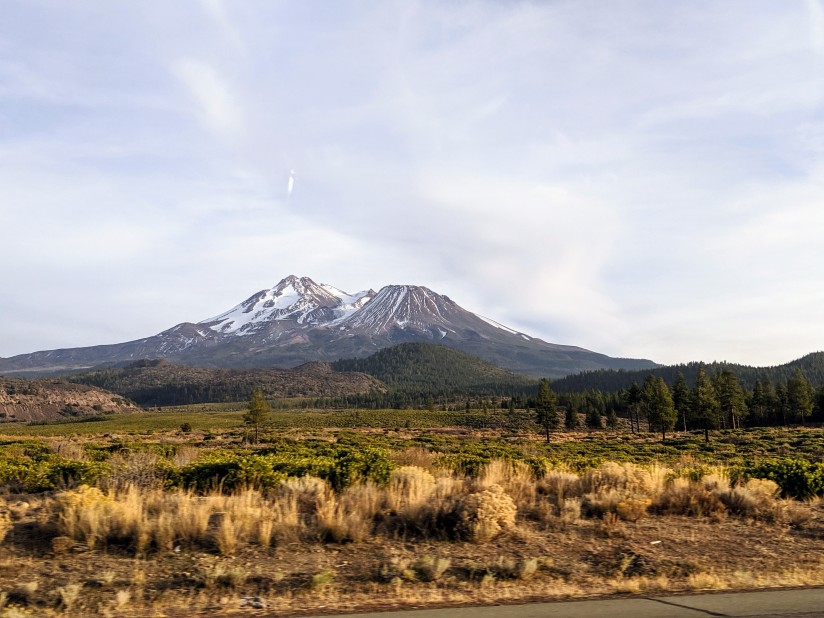 Not bad. Not as nice as the Cascades…

When I reached my destination, the little mountain town of Mt. Shasta, California, I parked the car and let Uncle Jesse stretch his legs.

Every passerby -not that there were many- smiled and said hello. While my new home in Bend, Oregon seemed to have ruined me for any other town, there was one consistent theme along the west coast thus far. 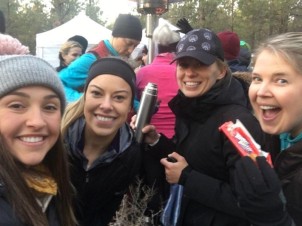 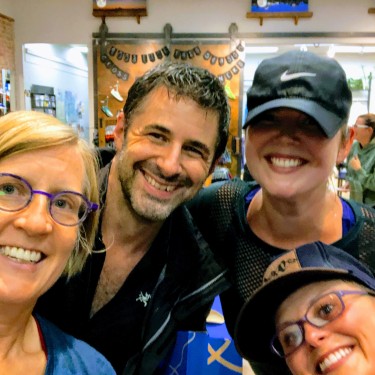 Also the hats. A lot of hats out here.

“I’m Georgie, by the way!” the adorable receptionist-slash-barista said as she extended a slender hand. By now I was checking out of my hip Mt. Shasta motel and we’d spent the past ten minutes chit-chatting.

“If you and your husband are ever in Bend, you have my name and I have a second bedroom!” I said as I waved goodbye.

Earlier in the week, I had decided to tick a few more west coast cities off my bucket list, and was pleasantly surprised when I found I could greet strangers like old friends as I wound my way from central Oregon to northern California. This whole…trusting…thing was kinda…nice.

During a recent trip back to New Jersey, my home state, I was startled to realize just how far I’d already let my guard down. After only four months in Bend, I’d forgotten how to avoid eye contact. To jump to the worst possible conclusion. To regard every kind act with suspicion.

I used to wear my cynicism, like most east coasters, as a badge of honor. You’re handing me a flier? Asking me how my day is? Hah! Go scratch, pal! I’ve got things to do! Places to be! Scowls to perfect!

But after just one week in Bend, I’d made a dozen friends and felt the reassuring hand of something I never knew I’d been missing: Community. Suddenly, I wasn’t afraid to ask for -or offer- help. A ride to the airport, some extra boxes, paint supplies, you name it. My new hometown’s selfless generosity was infectious. 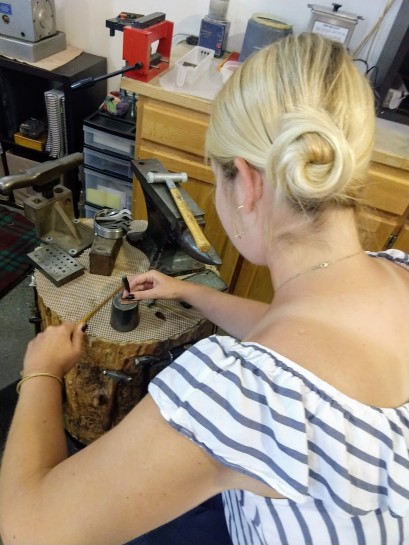 Here I am getting free metalsmithing lessons from the one and only Jim Dailing!

And sure, you’re gonna have to steal my sarcasm and pizza standards from my cold, dead hands , but this whole neighborly love thing?

Did you grow up in a don’t-make-eye-contact kind of environment, or a here’s-a-cup-of-sugar-you-didn’t-even-ask for place? Do you prefer one over the other?