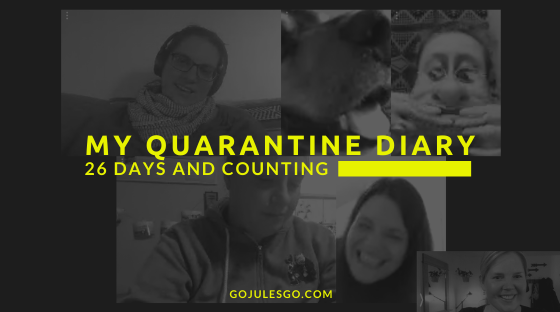 Go Jules Go has been social distancing since Saturday, March 7th. What follows is her personal account from inside an unknown bunker in central Oregon. Please disinfect before -and after- reading.

Thank you, Past Jules, for investing in that Scott 12-pack when you normally only buy one roll at a time.

Have been introduced to “new” phenomenon called “stress baking.” I contend that I invented stress baking in 1991 when I realized no one could ever love me like peanut butter blossoms could.

Local library announced that book return has been closed indefinitely. F$&*. No longer have excuse not to finish, “Memoir Writing for Dummies.”

Attempted to explain Zoom to Babs (mother). Will to live beginning to wane.

Re-watched “Outbreak.” Beginning to worry that all life-long obsessions -chipmunks, beheadings, and pandemics- will prove to be modern society’s downfall.

Waved to stranger across the street. Was nice.

Got Cinemax trial subscription just to watch “Contagion.” Key takeaway: Both Matt Damon and I will always find ways to embrace our Dad bods. (See: Day 19.)

Re-counted toilet paper rolls. 6. How did this happen?

Quarantine in effect until at least April 30th. My birthday. Plans to sleep in Justin Timberlake’s bushes and make day special now thwarted.

Dark days lie ahead. May have to cut Uncle Jesse’s hair myself.

OH MY GOD HOW ARE THEY GOING TO FILM THE “AMERICAN IDOL” LIVE SHOWS?!

I realized something today, and I’m not quite sure how I feel about it. I’ve come to conclude that the more embarrassing something is for me, the more amusing it is to you, dear reader.

With that in mind, I’d like to talk about Parents. Don’t they just say the darndest things? (I know it’s a two-way street, Mom and Pop. Remember when I said I wanted to quit the flute? Or when I told you I wasn’t going to college because I was going to be a screenwriter?) More often than not, people claim that their parents are an ongoing source of shame. Usually, I disagree with these ungrateful little bastards.

Except this one time.

Now, I’m not going to talk about the time they put my dog to sleep without telling me, or the many times they let me leave the house in white tights and boxer shorts. No, no. That would just be unenlightened.

I’m going to tell you about something you can probably relate to. I’m going to tell you about the time they told me I could be anything I wanted to be when I grew up. What the fudge, right? Why don’t we try lowering the bar a little, Babs and John? Some days I can barely remember how to tie my shoes. Yesterday, I asked my husband which side the heart is on*. In case it’s not already abundantly clear, I AM grown up, and I CAN’T be anything. In fact, the list of what I CAN be is getting shorter by the minute. I can’t even audition for American Idol anymore!

Before I sound like one of those ungrateful little bastards myself, I should pay tribute to all of the things I CAN do, thanks to my parents. So here, in no particular order, are my inherited skills:

I make a mean carrot cake.

I can paint a room without taping up the edges first.

I can play Chopsticks and Heart and Soul on the piano.

I can recite most of Dirty Dancing.

I can ABSOLUTELY recite every lyric to every John Denver song ever recorded.

I can use “merkin” in a number of ways during family Scategories without getting in trouble.

…Thanks, Mom and Pop.

*My husband would like you to know that I can’t really be faulted for asking this question, because I have a severe case of [self-diagnosed] selective dyslexia, whereby I usually cannot tell the difference between left and right. “Even when you’re looking RIGHT AT the GPS!” he is saying now. He is sweet, but I don’t need his pity.

Now, where were we? Ah yes, Project Management Boot Camp. Did you know there was such a thing? I didn’t either, until I decided to look for a new position at my company and then they actually hired me. During the interview process, I was told that there was this incredible opportunity to attend a Project Management Boot Camp in Pennsylvania. Not wanting to spoil the interview, I grinned and nodded enthusiastically.

“That sounds perfect!” I said.

If everything worked out, I would attend the Boot Camp during my first week on the job.

“The timing couldn’t be better!” I said.

When I got the job, I asked,

“Who do I talk to to get signed up for this Boot Camp?”

I then found out that they weren’t calling it Boot Camp to be funny. You had to leave on a Sunday night and wouldn’t return until the following Friday night. “Evening activities should conclude by 10pm” the sample agenda read.

“It will be fine!” I told myself and registered.

On Sunday, March 6th, I drove the 45 miles southwest, trying to keep an open mind about both the Boot Camp and Pennsylvania. Now that I had bought my first home in rural New Jersey (yes, such a place DOES exist), I really needed to be more welcoming of my neighbors to the west, whose country music stations were starting to invade my radio frequency.

It was pouring rain and the two-lane highway kept abruptly turning left and right. This should have been my first clue. But no.

“I’m going to learn so much!” I thought.

I checked into my nice, but not as nice as my own bedroom, hotel room and hung up all of my outfits for the week, looking to see where the iron was, just in case. “I am a professional, wrinkle-free businesswoman now,” I said to myself.

If I hadn’t eaten before I’d left, I could have had complimentary room service.

“This is going to be like an all-expenses-paid vacation,” I mused.

At 7:30am the next morning, I filled my ice bucket so that I could tuck my vodka to bed for the day, like any good vodka sitter-slash-drinker. When I went to re-enter my room, a strange man opened the door.

“Oh, sorry, wrong room!” I said, realizing I was two doors away from my own room. I briefly recalled the time I went to the wrong house for a Christmas Eve party and stayed for 20 minutes before anyone realized it. Finally they pointed me next door. Snapping back to present day, I noticed this man had a notebook and added, “Although I think we’re headed to the same place!”

He gave me a strange look, but it didn’t dawn on me until much later that someone with a bucket of ice and someone with a notebook should NOT be going to the same place.

I recovered from the momentary embarrassment and reported downstairs to the hotel restaurant for breakfast. All five days were to start promptly at 8am. A few people were milling about, grabbing bagels and coffee, including the man I had just bumped into. “Maybe now he won’t think I’m crazy,” I thought, but watched as he took a seat at the opposite end of the restaurant.

Twenty minutes later, we gathered in the large, freezing conference room that was to be our home for the next five days. I had a panicky moment where I couldn’t find my name card, but there it was, in the far left corner, next to wrong-hotel-room guy.

“Whew! Imagine if they didn’t have me registered!”

I introduced myself and looked at all of the neat trinkets in front of me.

“I am going to get the royal treatment!” I thought, amused by the blue camouflage bandana and dog tags at my work station.

There were only 17 other people in the boot camp and I didn’t recognize anyone, even though they were all from my company. We were broken into two teams, blue and green, based on the color of our bandanas, and told that we had to wear our dog tags at all times or we’d have to buy the intructors a drink.

“What fun! My team is going to win everything!” I thought, glad I didn’t trade for a green bandana as soon as I sat down, like I had wanted to.

The two instructors both had Southern accents, which seemed to enhance the Boot Camp theme. I wondered if either one would snap during the week and tell us we were worthless little maggots. I kind of hoped they would.

“What happens in boot camp stays in boot camp,” they told us, and the first sense of foreboding came over me. I wondered how many more times people would say that stupid line before I died of boredom.

As they went over a disconcertingly vague verbal agenda for the week (they wanted some things to be a “surprise”), I quickly realized that the reason for such late nights was because we would be in lectures all day and in our teams all night, working on projects. If I thought I was going to get to watch Vampire Diaries and Glee, or ever see the light of day that week, I was sorely mistaken.

By Day 3, shortly after our team had to perform a dance number, to a song of the green team’s choosing (I would tell you more, but I’m afraid the instructors know where I live. I KNOW they know where I work), I hit a low place. A very low place. The kind of place where you think of the American Idol contestants during group week, or the poor bastards on The Real World, and for the first time ever, feel a genuine kinship. If someone brought me into a confession room just then, pointing a camera in my face, I’m not sure what I would have looked like, but it wouldn’t have been pretty. You would have been sitting at home, with your sweet dog and loving husband, judging me for binge drinking and sobbing during dinner “breaks.”

Project Management Boot Camp broke me, and I wasn’t sure I’d be able to look anyone in the eye when I returned to work. (I still can’t look at the CD of photos and video clips they sent us home with.) Luckily, I’m almost as good at (BIG, FAT) white lies as I am at blog titles.

“It was a fantastic learning experience!” I said to my new manager the following Monday, staring at the cracked leather on my left boot.

“I would definitely recommend it!” I wrote, when the training department sent around a survey two days later.