With an impending tax return about to pad my wallet, I started looking for living room furniture in January. We’d been in our house almost two years, and it seemed high time to replace the folding table with something a tad more permanent.

I started with the basics, leaning towards country cottage meets shabby-chic. A rug, TV and TV stand:

Then I found out we’d be getting significantly less than I thought we would from Uncle Sam (thanks to Peppermeister‘s new job not taking out the appropriate amount), so I had to switch tactics midstream.

It took weeks of perseverance, but eventually I found this Pottery Barn coffee table on Craigslist for a steal (a steal I tell you! When we went to pick it up, an attractive, somewhat scraggly, 30-something-year-old ginger gentleman was waiting in his garage. He lived in a very posh development on a golf course, but there was an air of deprivation about him. We found out it was his parents’ house, and he was storing the coffee table there because of the extra room. We immediately convinced ourselves the darkest fate had befallen him; either he was the father of Snooki’s unborn child, or he was newly divorced and had to sell his furniture to pay alimony. Our glee at finding such a bargain quickly turned to awkwardness and sympathy. And why yes, thank you, this is my longest parenthetical aside of all time):

Then, I found this end table and lamp from HomeGoods:

I wasn’t sure either of them were working, until, on Sunday, February 12th, I put them to the ultimate test… 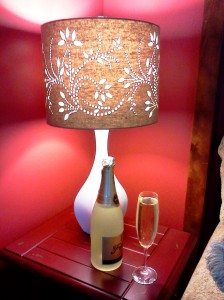 Finally, I handed my phone to Peppermeister and asked him to take a picture of me – to confirm that the living room matched my champagne. I grinned, glass raised. 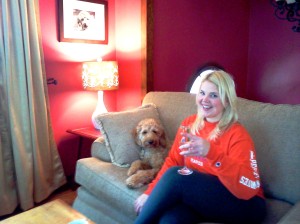 Peppermeister fussed with my cell phone for a moment. “Say, ‘Whitney Houston just died!'” he cried.

My grin dropped and I giggled uncertainly. “Wait, what?”

He cackled at my dismay.

“Did she really die?” I asked, laughing in the way people do at funerals and at their boss’s jokes.

“Yes!” he replied, trying to catch my reaction on camera:

On the upside, the final product is delightful:

48 thoughts on “My New Living Room (or, How I Found Out Whitney Houston Died)”