Last Sunday, Mother’s Day, I was toiling away at Babs’ house, helping her with a garage sale. She’d decided to use the day as an opportunity to enslave all three of her children.

Aside from the joys of spending time with my darling mother, I got to giggle at your incoming comment submissions for the “Don’t Lick the Minivan” book giveaway. 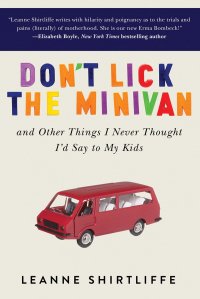 Before I announce the winner, though, I thought I’d tell you about my favorite Mom bomb…

Growing up, my parents enjoyed their evening cocktails…

…but Babs always likened drugs and smoking to the worst kind of criminal act. I’d have been better off robbing a bank than sneaking a cigarette.

“I never did drugs,” she told us, time and time again, as we watched our favorite childhood stars get busted for their evil indulgences. “And smoking is the most foul, disgusting habit in the world. Your breath smells and your teeth rot and if you ever take up smoking, well…” She couldn’t even finish that sentence.

Years passed and her three children grew up. What went on behind Pearl Jam poster-covered dorm room doors was a mystery, as far as Babs was concerned.

In my early 20s, thinking maybe the playing field had leveled, I decided to probe.

“So you’re telling me you grew up in the 60s, and you NEVER smoked pot?”

I was sure I knew what was coming. Sweet, innocent Babs paused and then said,

I knew it, Babs. I always knew it.

And the winner of “Don’t Lick the Minivan” is…

I was taking my friend’s 6-year old son out for a walk a few weeks ago to give her a break (leaving her with the other three…shall I explain why? I think not.)

This is our conversation within the first two minutes.

He pulls a tiny grey stick sword out of his pocket and “lights it” with a red piece of lego. “I don’t normally smoke in front of people…” he says, exhaling long and slow.

Because I’m way cooler than him, I replied. “Oh. I see. Wait a minute…I’m a person!”

He thinks. He inhales another drag on the tiny sword and says, “No you’re not, you’re a woman!”

And that. right. there. is why he quit smoking his toys…giving up the habit in record time.

Happy Mother’s Day (if you’re a real person, that is!)

Congratulations, Hiddeninsight! You slayed me with this one. I’ll be in touch via email!