Earlier this week I told you about THOSE G.D. CHURCH BELLS that go off at ALL HOURS one block from my new apartment.

After four months in this neighborhood, I’m starting to wonder what the ever-loving chipmunks is going on. The church bells are just the beginning. Odder still, this town is a mere two miles from where I grew up, and yet it’s as if I’ve stepped into The Upside Down. Nothing here makes sense, and it’s starting to scare me.

Since everyone else seems to have accepted this lunacy as status quo, I’ve decided to take matters into my own hands.

Go Jules Go, keeper of peace, server of justice, lover of being alone and eating peanut butter straight from the jar without any interruptions thank you very much, HAS ARRIVED.

First order of business? Handing out citations to the town’s most egregious offenders. Aside from His-Church-Who-Must-Not-Be-Named, behold:

A few weeks ago, someone left -I’m not making this up- a red package labeled “TNT” on top of a mailbox on my block. A passerby notified the police, and within moments, the bomb squad arrived. These cartoonish hijinx shut down my street and kept me from enjoying the eight cases of wine I’d just purchased from Trader Joe’s for an entire hour.

Hi. Meet my dessert. She comes from a restaurant around the corner from my apartment, where they also consider Bachelorette tea parties the height of merriment. Don’t they know it’s not dessert unless you hate yourself afterwards?

The town center’s crowning Christmas jewel, and the view from my living room all December long.

And last, but certainly not least…

I found this note in my mailbox on Tuesday, from someone I had only briefly met when I first moved in. “Phoebe” later revealed her question via text: “Hey, would you be interested in swapping apartments [from your studio to my much more expensive 1-bedroom]? My boyfriend and I just broke up :(.” 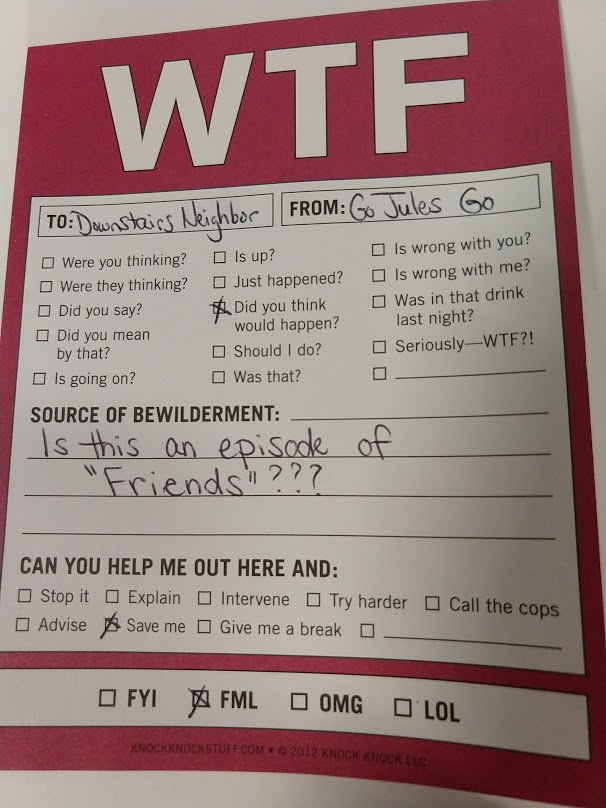 I’m sure this won’t be the last of the nefarious acts in my new topsy-turvy world. Stay tuned. Stay vigilant. Stay safe. Sheriff Jules, over and out.

Any heinousness happening in your neighborhood?