Oh, yes, I DID survive. And dare I say? Thrived.

Hot air ballooning was so much more than I could have ever hoped for.

And not just because of the balloon. Or the hot air.

But because it involved so, so many guilty pleasures. I hope you’re ready for an eyeful.

It started around 6pm on Sunday, when Peppermeister, the man trying to kill me via his 30th birthday “present”, herded me into the car. I knew what was up. Luckily, I’d already prepared my last will and testament.

We headed to a main road not too far from our house; this was the only sign of what was to come:

A long driveway led to an open field, where two other couples were milling about. Peppermeister is ruthless, I thought. With all this extra weight, we would plummet to the ground with even more force than I had originally feared.

He reminded me not to socialize because “people like us too much.” It was a cover-up, because he didn’t want me to get close to anyone when we were all about to die. Except he was right. People totally like us too much when we talk. In fact, we try not to be ourselves in public at all. So here we are at a picnic table by ourselves. Being [secretly] awesome. 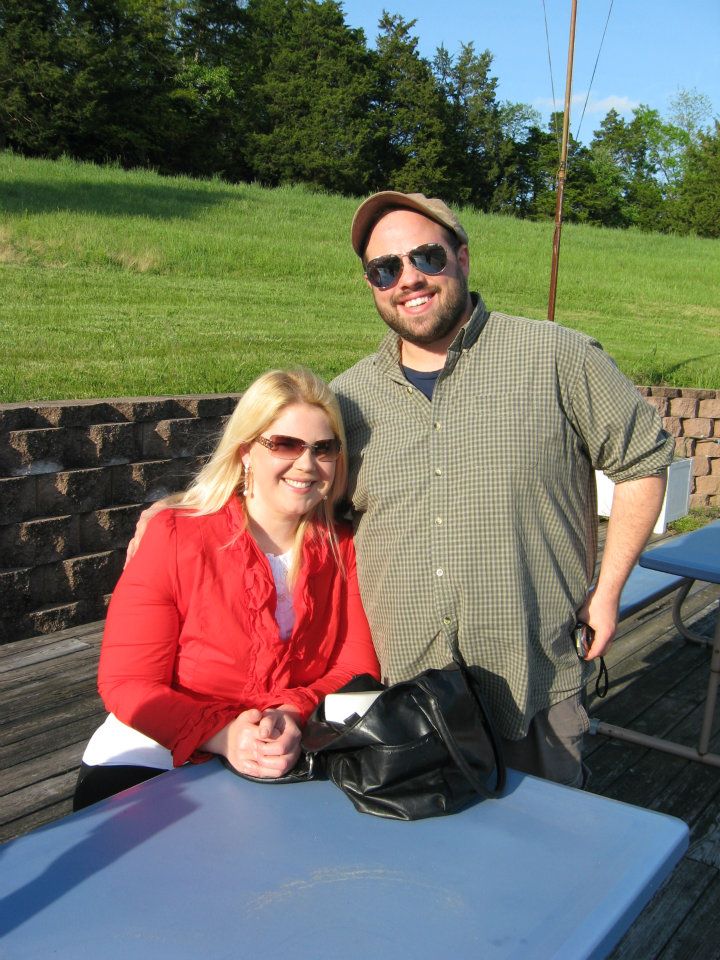 An old-school bus with a trailer pulled up, hauling a giant basket. A slew of folks immediately began assembling our death trap. 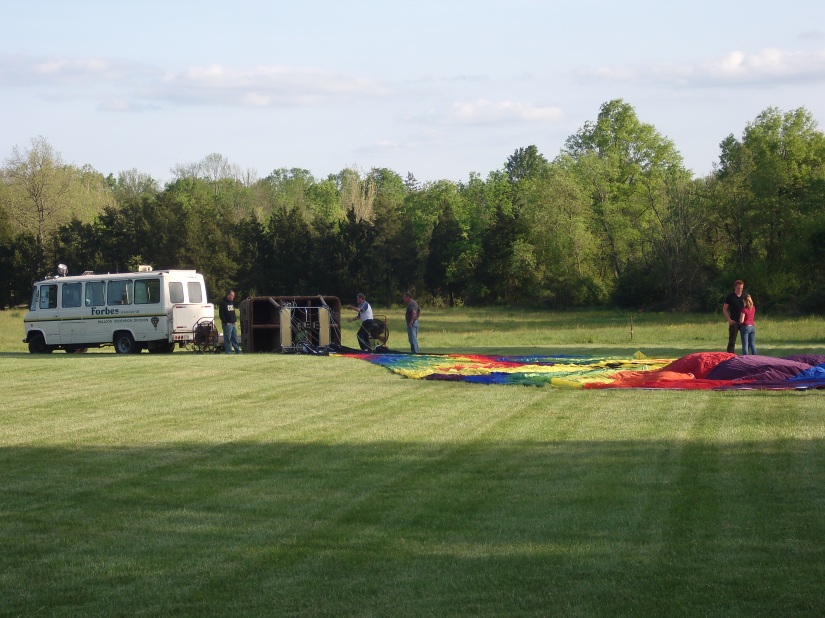 Babs, a.k.a. Mommarazzi, was, of course, on hand to capture everything:

I was glad it was a rainbow. Hot air balloons are supposed to be rainbows. And rainbows are good luck. …Right?

I put on a brave face. 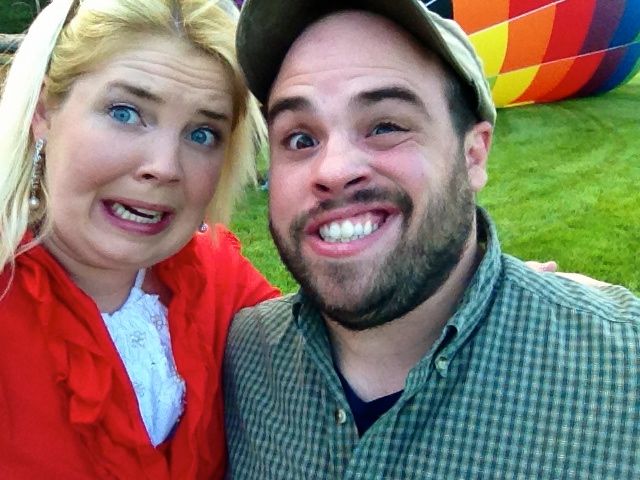 And that’s when I saw it. The greatest handlebar mustache of all time. You can even see it from the back (far right). The perfect distraction from imminent death. 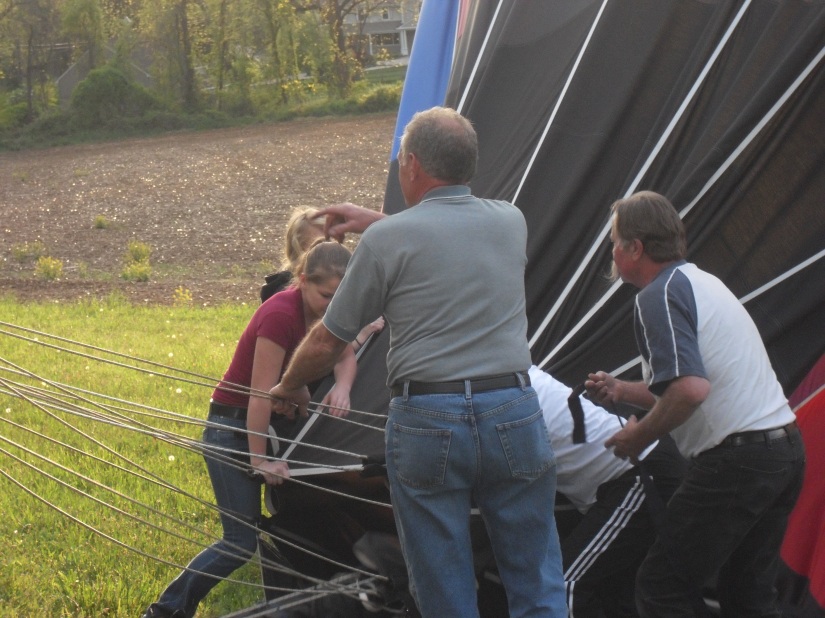 Our basket had 5 compartments, and each person had to climb in and out while the basket was on its side. I made it, and started worrying I would drop Annie Leibovitz (my iPhone), causing someone else’s death.

I glanced upward nervously; I prefer to be on fire only metaphorically speaking.

The force of the now-inflated balloon pulled our jam-packed basket upright. Oh holy chipmunks. We have lift off.

Goodbye, Babs! Remember what I said about selling Peppermeister’s instruments! …I love you. Psst. Handlebar Mustache is RIGHT. THERE. 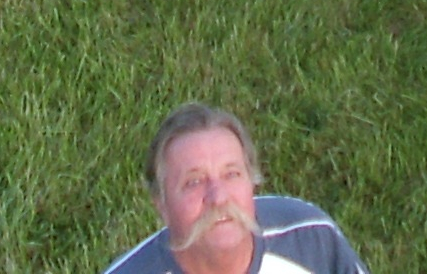 Tragically, the winds blew us northwest, away from The Mustache Miracle and right over my place of employment. I’d post pictures, but I feel like they might shoot me (how many times can I cheat death in one week?). 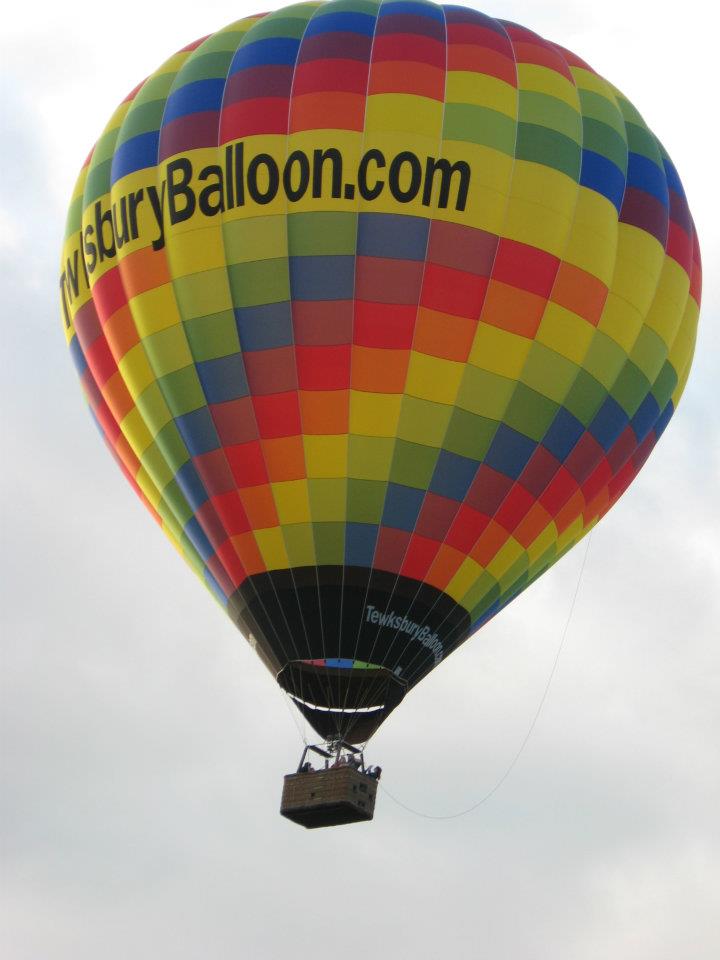 Here, look at these instead:

Ah. You never knew Jersey was this beautiful, right? Yes. Quiet, serene, relaxing… oh, wait. Did I mention we were with two couples from Brooklyn (one young, one middle-aged)? Here’s an 8-second reenactment of our first few moments in the air:

I had to admit, it was relaxing, despite their piercing chatter. I was lost pondering potential Glee covers when we started running into trees. We got closer and closer to the ground, and made a bumpy ‘touch down’ in a corn field. The  fire cord-puller guy claimed it was “to slow us down.” Personally, I think he was just trying to shut Fran Drescher up.

The van that brought the hot air balloon followed us the whole time, because, in case I failed to mention it earlier – they have no control over where the balloon will go. 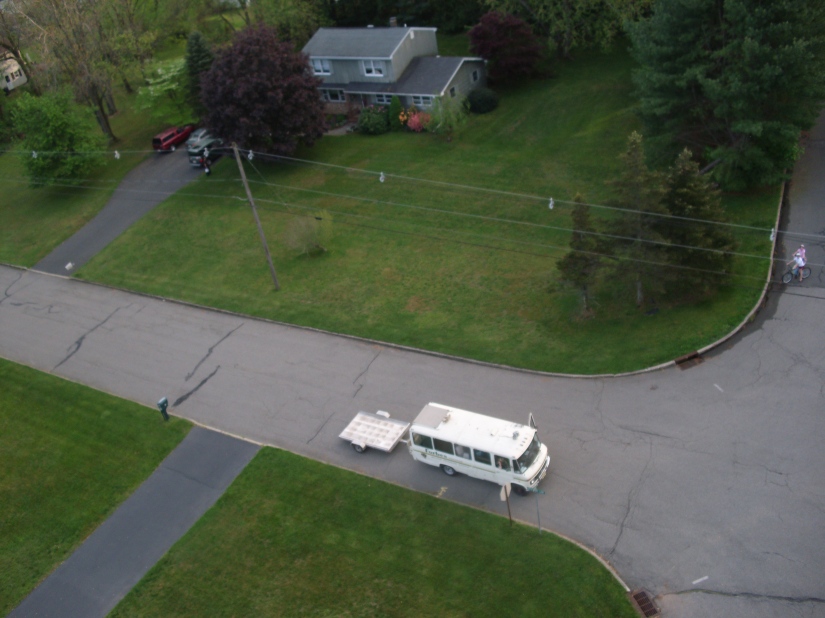 I was a little worried about crashing into power lines, or this highway. (Or that drivers viewing our balloon-y majesty would cause a pile-up on said highway.) 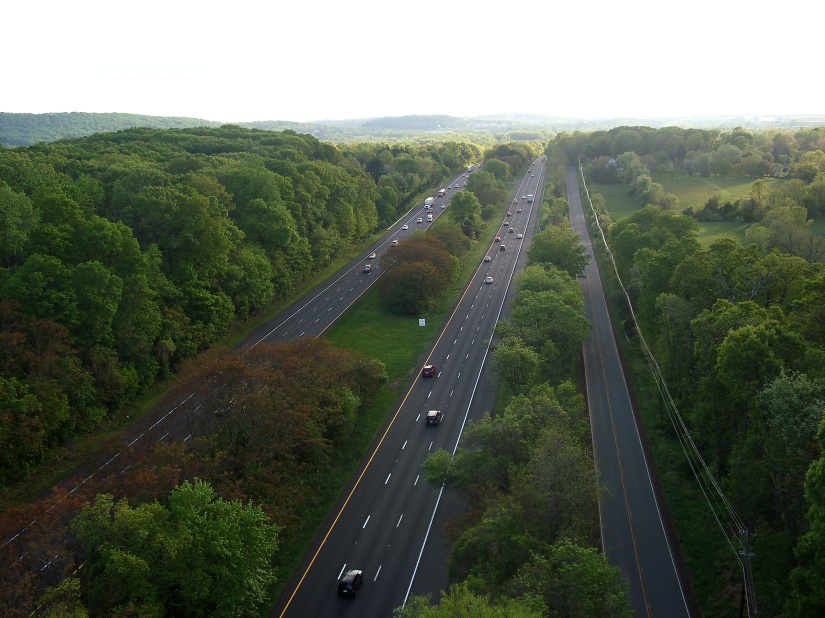 I probably shouldn’t have looked down at the inside of the basket, either.

Yeah, I really shouldn’t have read that… 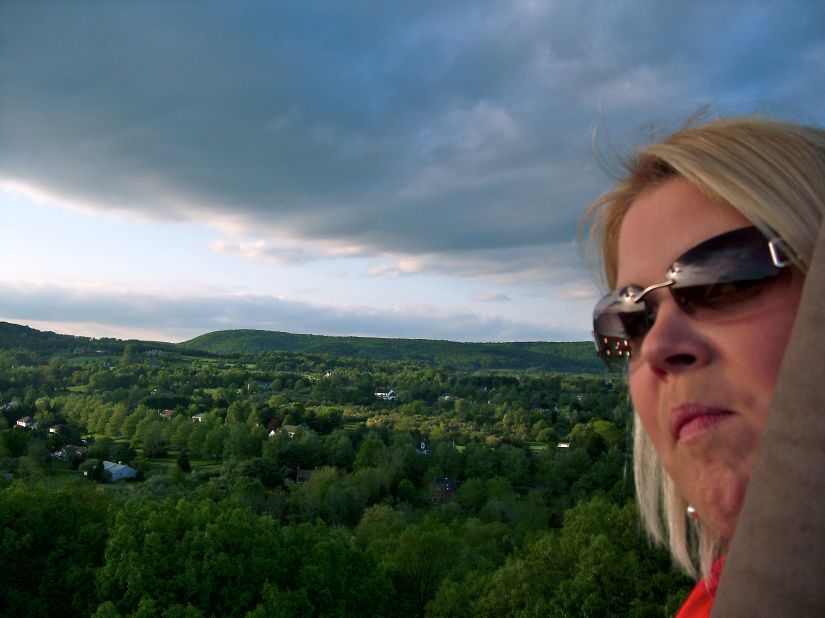 Why are we going so low again? Why? Oh no.

Luckily, we had enough juice to get our basket out of harm’s way, and got to watch as families came out of their houses, dogs barked, and little kids begged us to land in their yard (who doesn’t love watching a hot air balloon? It’s like music. Or eating asparagus and then peeing). Note that even so close to The End, I had only one thing on my mind: Snacks.

About 40 minutes later, they decided there wouldn’t be a better opportunity to land but in this backyard. I braced myself, and…

…We made it. ( Falling out of the basket was even more hilarious than climbing in. My shoe fell off in the process, and Handlebar Mustache complimented my toenail polish [which totally matches my GoGuiltyPleasures slap bracelet, natch]. I may have to consider a Third Husband.)

A copy-cat balloon landed right after us. They didn’t get the memo about the rainbow pattern requirement. I’m surprised they survived. 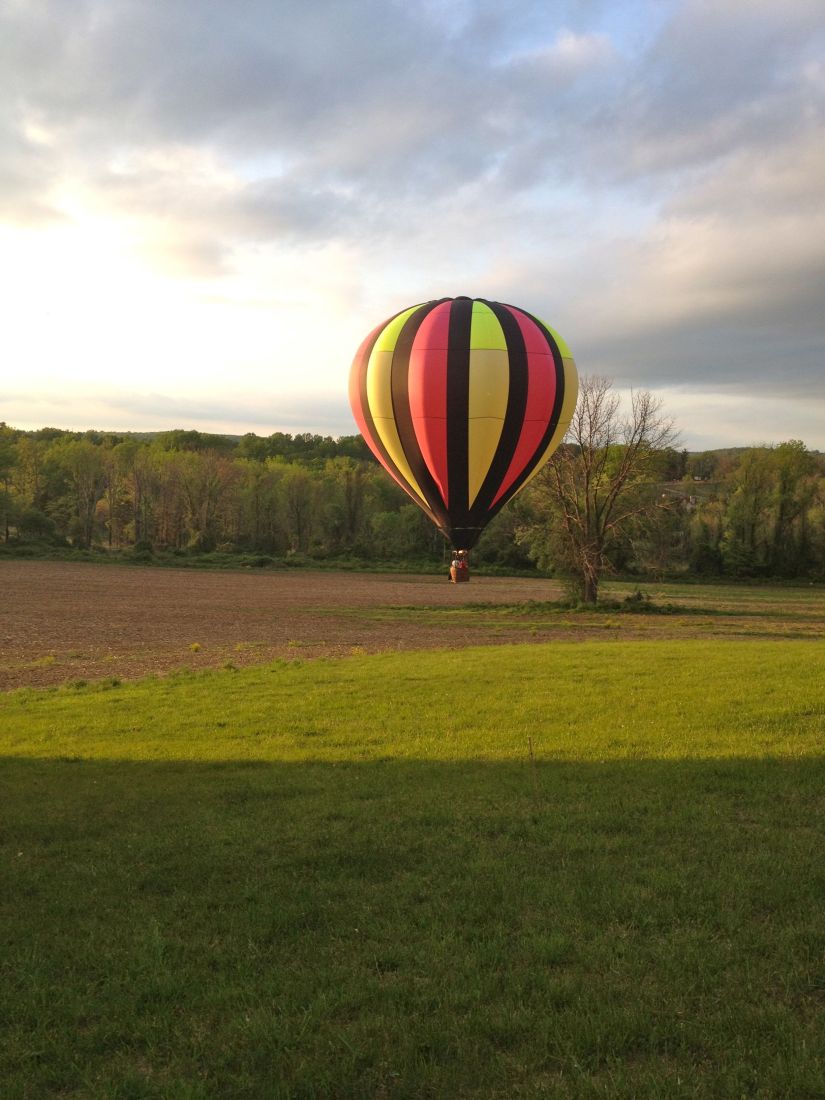 And that’s when we found out what had happened. Somehow, I completely missed it. Young Mr. Brooklyn [Gypsy?] had gotten down on one knee –in the basket– to propose to his infant girlfriend. There’s no way the basket should have stayed afloat with the weight of that rock in it.

Here I am attempting to point at the ring during the ride in the van back to our cars (where are Misty’s ninja photo skills when I need them?):

Once we made it back to home base, we were treated to champagne, beer, cheese and crackers. Apparently, hot air ballooning began in France, and when ballooners would land in someone’s yard, the homeowners would freak out. ‘Cause, you know, it was clearly a spaceship. To ease the tension, the ballooner would offer a bottle of champagne to the traumatized family.

Now. Why couldn’t Peppermeister have told me that from the start*?

*He claims he totally did**.

**I never listen to him. Ever. It’s probably why he wants to kill me.

So, what did you think of that mustache/engagement?