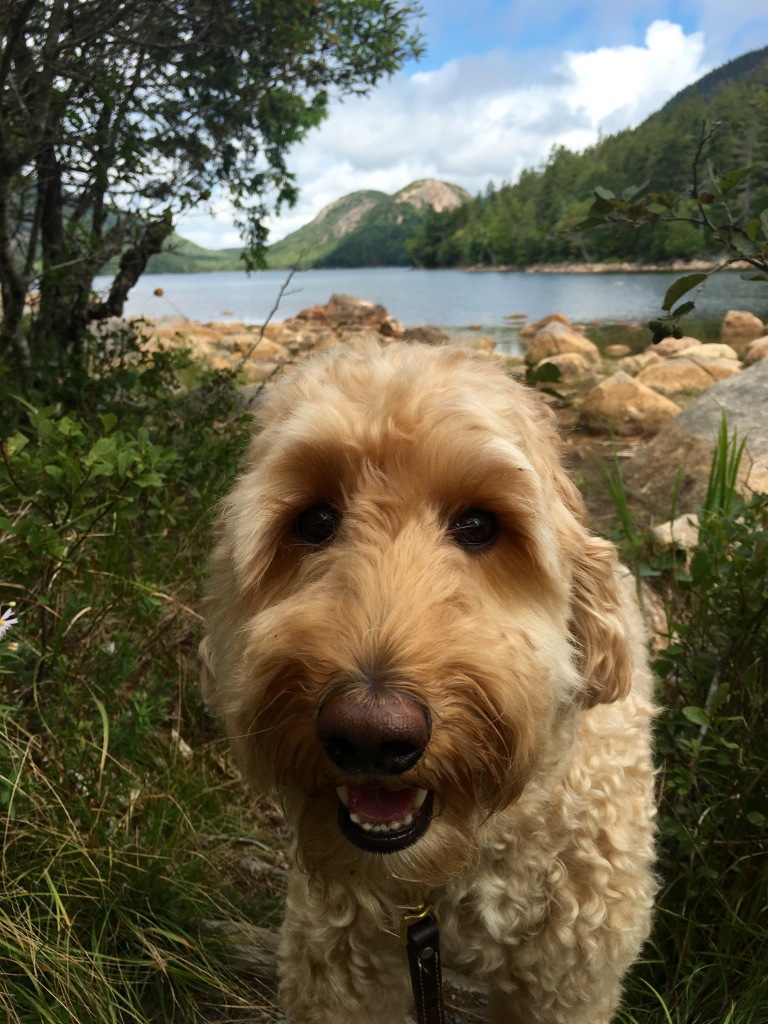 When I got a dog, I vowed never to leave him home alone for more than a half a day, tops. “It’s not fair to him,” I said. “I’ll be his whole world, the side pony to his elastic hair band, the ‘stache to his wet nose, the Kelly Kapowski to his Zack Morris.”

And for the past six and a half years, I’ve been pretty successful.

This week, I took my dog with me on a trip to Maine, and for the most part, the scene out and about has looked like this:

RANDOM PASSERBY 1: Is that a Labradoodle?

ME: His name is Uncle Jesse.

RANDOM PASSERBY 2: Is she a puppy?

(Repeat above to infinity.)

On Wednesday, I took Uncle Jesse to Jordon Pond in Acadia National Park, and just as we set foot on the trail, a shout stopped us.

A thin, middle-aged man took his foot out of a red kayak and jogged over.

No! Shut your eyes and turn around, madman! I thought.

“I have a Goldendoodle. I couldn’t bring her today because I’m going kayaking.”

“Here, let me show you a picture.”

Kayak Man pulled out his phone and took three minutes to bring up a blurry photo of a giant Goldendoodle in front of a tent.

A park ranger who’d been within earshot approached. He stared at Uncle Jesse.

“Are you sure she’s a Labradoodle?” he asked.

Sometimes, friends send you things on Facebook that they think SCREAMS you, and you think, “Meh. Okay.” Or “Yeah, that’s cute.”

But sometimes, friends send you things on Facebook that change your life.

On Wednesday, I received the following Facebook intel from both my BFF, Jenn, and my blog bud, freshveggies/gingerleaphotography:

YES. YOU READ THAT CORRECTLY.

Jesse and the Rippers are performing on Late Night with Jimmy Fallon. tonighT. (click for more info.)

Jesse and the Rippers!

As in, Uncle Jesse from Full House!

No. There are no words.

What…what are you waiting for? Go set your DVR! (I say “set your DVR” because I assume that, like me, you a) go to bed at 8:30pm, and b) with great pain, deleted a high-def version of Sharknad0, and now have room on your DVR.)

What TV characters from your youth would you poop a brick to see brought back to life on a late night talk show?

P.S. – If you need a distraction from counting the seconds ’til this airs, why not travel back in time and watch my AMAZING Uncle Jesse (man) / Uncle Jesse (dog) tribute video?

Today things get ugly. As ugly as your babies. I kid, I kid.

Grab your boxing gloves, Chipmunks, because Don, of don of all trades, and I are going head-to-head over:

We each get up to ten points to make our case. Don may be a father, lawyer and cop, but little does this man-of-allegedly-every-occupation know, I have experience in blog debates. Many moons ago, Third Husband proposed we discuss the merits (or lack thereof) of Glee, and I think we can all agree that after taking a slushie to the face, I emerged the clear victor.

I’m a little scared to read Don’s opposing argument, though. Not because I’m worried about valid points, god no, but because he’s a shamelessly verbose, terrible person with zero filter; there’s no telling where he’ll take this. He’s already cursed and posted fake sonogram pictures on my Facebook wall, sending both my mother and mother-in-law into a frenzy:

So, Don. As much as I like to play dirty, get your mind out of the gutter and grab the leash (that one’s just killing you, isn’t it?). By the time you’re through reading this, you’ll be ready to trade your ten thousand sticky offspring for a downy-soft ‘doodle.

Why  Doodles Are Better Than Babies

5. You get to pick the cartoons / car music.

8. As long as you feed them regularly, they don’t judge your alcohol dependency.

9. You get to pick their halloween costumes. Indefinitely.

10. You don’t have to deal with other dogs’ parents if you don’t want to.

Note how I kept this nice and short, for your reading pleasure. Because I care about you, and respect your time, Debate Decision-makers. Unlike some people.

I look forward to hearing how right I am. (In case you missed it, here’s the link to Don’s opposing argument.)

Did I miss any reasons why dogs are better than rug rats?

I’m not sure you’ll recognize that today is special, when we shower you with gourmet, organic treats, long walks and hour-long massages. Or when we coo over and over again, ‘He’s a good man. That’s a good man. Who’s the best man?’

Already you’ve been with us for 2 years, 9 months and 28 days. Now’s not the time to talk of my guilt over your silver-spooned upbringing, but rather to praise your genetic superiority and extremely reputable entry into this world thanks to your mother’s tireless research and your father’s stubborn allergies.

We named you after John Stamos’ character on Full House because we knew you were destined to be the cool one. And have great hair.

Here are just a few of the things we love about you, Uncle Jesse:

You fetch your Hot Pocket toy when we sing the jingle (“Ho-ot Pocket!”).

You dry your tongue on our pants after you take a drink.

You have access to your kibble all day, every day,

and only eat it when we sit down to dinner; then you nosh lying down.

You help Dad tune the guitar when he gets to the 4th string, every time.

You learned how to do Full House-themed tricks at 9 1/2 weeks old.

(If people don’t believe the last two, they should play thE video!)

If you disapprove of someone’s petting methods, you lick them aggressively to correct the faux  pas. They mistake this for affection. I’m sorry we blew up your spot, but you do it to us, too, you ungrateful well-bred specimen.

Your legs are super long and your paws are incredibly fancy, especially when you tuck them under, or cross them just so.

You’re convinced the bedroom ceiling fan is possessed and/or omnipotent. If it’s been too quiet for too long, or something is otherwise amiss, we catch you staring at it dubiously.

I hope you enjoy this birthday tribute video I made especially for you:

Your doting and equally adorable mother

So what do you get for the Australian Labradoodle who has everything? Well, you can make like a Shel Silverstein tree, and give. Please join me in helping friend and fellow blogger, Valerie from Nikitaland:

Note: The ad below the Pledge for Pets button is not part of this post.

To my fellow Americans, and anyone else who believes in freedom, equality and really, REALLY good barbecue…

I wasn’t going to post today, but Uncle Jesse had something to tell you:

Any plans for today? How mad are you that we have to go back to work tomorrow (if you don’t, listen, don’t be a snot-bucket and rub it in)? 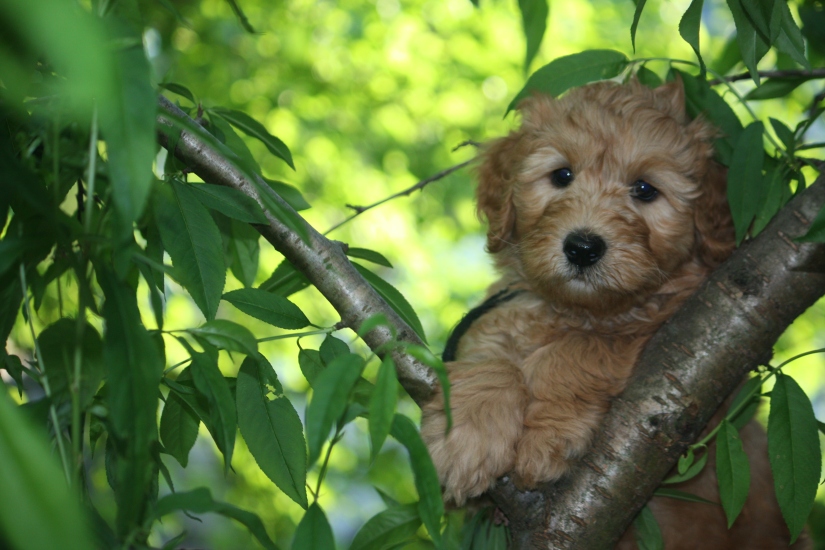 As you might recall, one of Uncle Jesse’s first tricks was, “Watch the hair, huh!” (An homage to his Full House namesake.) My jaw-droppingly expensive multi-generational Australian Labradoodle was 9-10 weeks old when he mastered this delightful ditty, immediately justifying his price tag.

Since then, I’ve come up with all kinds of ways to amuse myself at his expense. Mostly in the form of nicknames, which change on at least a biweekly basis*. (Current nickname: Schnoodle. Because he looks like a noodle, it rhymes with poodle, and he’s just so darn…schnoodly. Don’t you think?)

man.” Along with his name, it tends to confuse people, so we keep doing it.

I also like replacing dog-related phrases and commands with things that are ticklier to my fancy. “Fetch,” for example, has become an appreciative, “Thank you.” As in, “Thank you in advance for bringing me that toy. It was so very kind of you.” Works like a charm.

My favorite canine comic relief comes from what we say instead of, “Wanna go for a walk?” Instead we simply shout, with appropriate fervor, “Holy shit!” No explanation necessary. Just watch:

P.P.S. – We plan on dressing him up as a wedge of cheese this Halloween. Get it? A Cheese DOODLE! Also works for an Uncle Sam costume: A Yankee DOODLE! 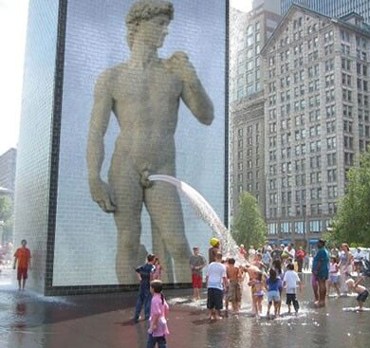 Let’s see. We’ve already covered the fact that I was an extra on “Dawson’s Creek,” am obsessed with Glee, Harry Potter and little miss pageants, and that I named my dog after a “Full House” character. You might be thinking this well’s about to dry up.

Nay, friends, I’ve only just begun. (It certainly helps that blogging about guilty pleasures is, in and of itself, a guilty pleasure. That shouldn’t be allowed. It’s like trying to stare at the sun.)

Here are a mere few of the things I plan to bring to your [rapt] attention over the coming weeks. (Please feel free to express your gratitude by subscribing. Or by sending pictures of animals dressed as other animals.)

1. What to expect if you see Daniel Radcliffe naked, live, as I have.

2. What NOT to say if someone asks if you want to attend a week-long Project Management Boot Camp in Blue Bell, Pennsylvania.

4. Robert Pattinson SINGS! (Holy sh*t, how have I not gotten to this yet!?)

5. My Plan to Save Mankind, a.k.a. The Power of Haikus

6. MY MOST SHAMEFUL GUILTY PLEASURE OF. ALL. TIME.

See you on the flip side, Crackers (have you not tried these yet?)!

We had our breeder picked out before the puppies were born, and it was a long waiting process until at long last Uncle Jesse, our precious Australian Labradoodle, came to live with us.

When the puppies turned 7 weeks old, we were told which one would be ours, and I thought it only fitting to make a tribute video to occupy me until we could pick him up 1 week later.

(Special thanks to Beth!)